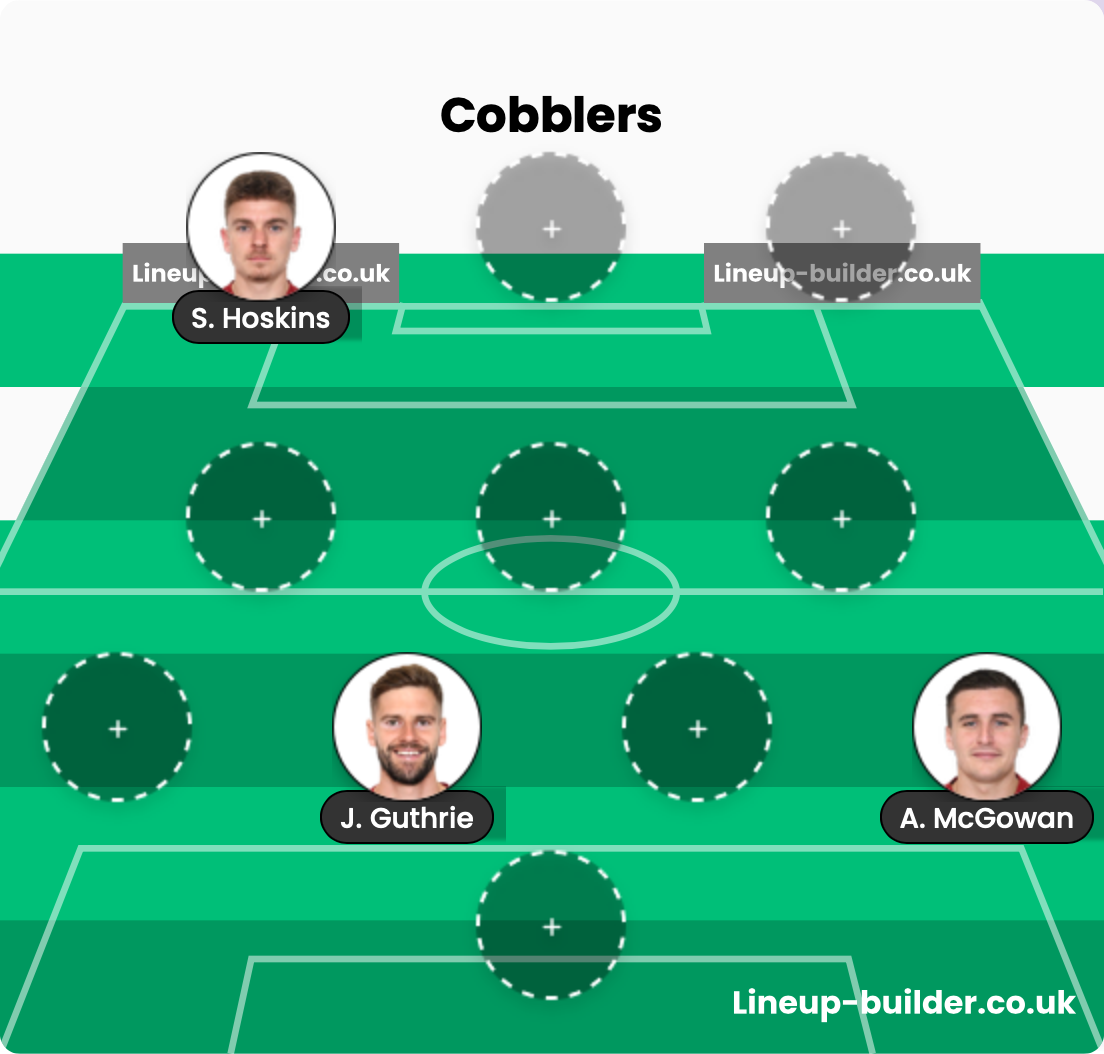 With 2022 coming to a close, it’s time to announce the Cobblers team of the year.

It’s been a good calendar year for The Cobblers. We’ve won 23 out of 49 games in the league (including play off matches), amassing a total of 83 points. That would have seen us finish 3rd last season, just 1 point behind Forest Green and Exeter.

Continuity has been a big factor in that success, so you’d think choosing a team of the year would be fairly easy. Turns out, in some positions at least, it makes it harder. 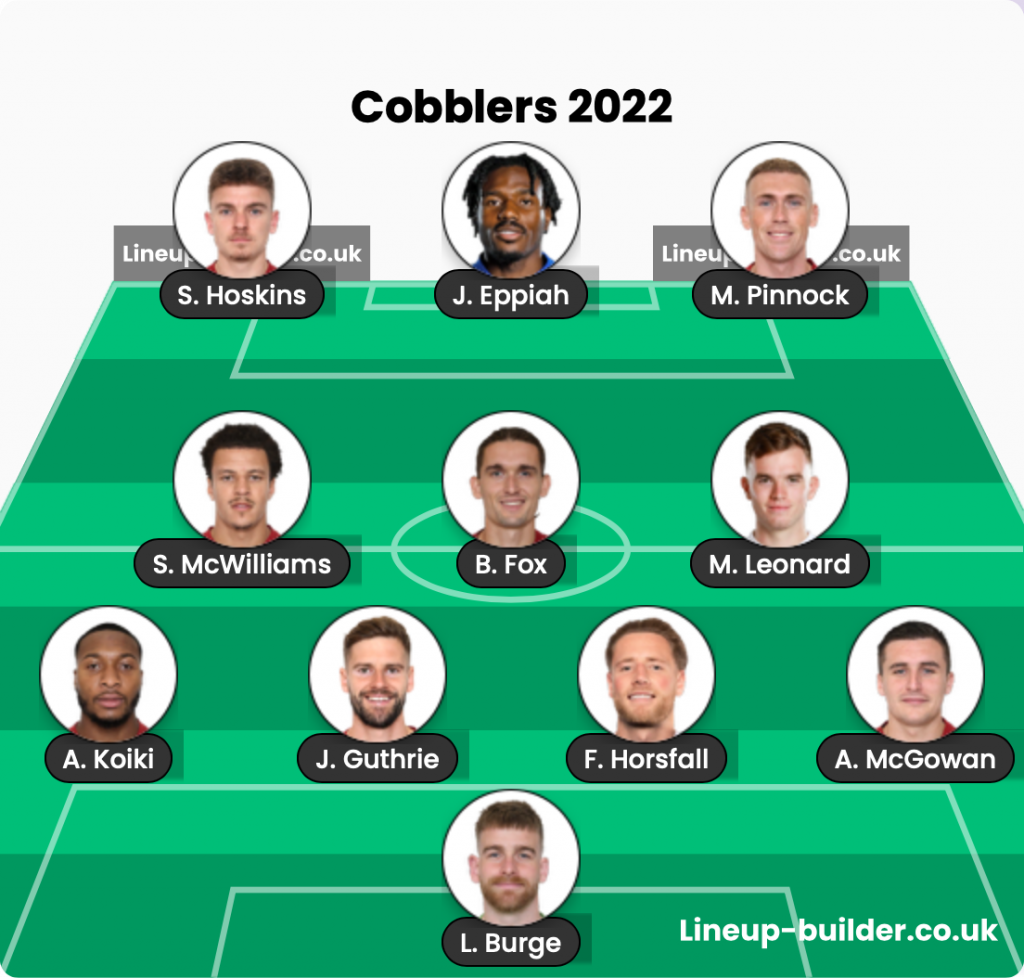 Choosing between Liam Roberts and Lee Burge truly gave me a headache but Burge just pinches it.

There’s no denying that Roberts was our best goalkeeper in years. He played every league game for us in the 2nd half of last season, conceding just 21 goals. Of course, he did get sent off in the last game of the season, away at Barrow, which put the first nail into our play off campaign. That isn’t why he misses out though.

Replacing Robbo was always going to be a difficult task but Lee Burge has filled those boots brilliantly. He’s conceded just 22 times and made a match winning save in pretty much every one of the 22 league games he’s played.

It genuinely is a difficult choice and that, in my opinion, is a good thing.

Despite being injured for the majority of the 2nd half of the year, no one comes close to Ali Koiki at left back.

After deputising for Josh Mills early on in the 21/22 season, Koiki never looked back. Even when Mills was fit enough to play again, Koiki still retained his position in Jon Brady’s team.

His direct running and trickery always gets the pulse racing as fans believe a chance will come whenever Koiki charges forward. The only thing lacking to his game really has been goals. Something he finally put right in the play offs when he scored the consolation goal in the 1st leg at Mansfield.

The Cobblers captain was always going to make the team of the year.

After scoring 8 goals last season, he’s got a further 2 so far this time around and has been the only ever present in the centre of defence thus far.

He might have up sticks to Stockport in the summer, but The Hors still takes his place in the team of 2022.

Along with Guthrie, Horsfall was part of a terrifically capable defensive unit in 21/22 and he pitched in with 9 goals to boot.

While Sam Sherring has been a good replacement, Horsfall’s contribution at the top end of the pitch earns him his place over the youngster.

Another who was an easy pick. Like Koiki, the Scouse Cafu may have had his injury problems but there is simply no one who replaces him.

McGowan rarely puts a foot wrong in defence and joins in with attacks, frequently filling the space left by Pinnock who has wandered inside.

It’s also difficult to ignore how much he clearly enjoys being at Northampton. He’s often the ring leader of any fun we get to see and wears his heart on his sleeve. Remember his post match interview at Rochdale last season?

He’s the only academy graduate who’s made a real impact on the team in recent years and keeps getting better and better.

It seems that Jon Brady has demanded more of his young starlet in an attacking sense this season and having gone the whole of last season without getting on the scoresheet, McWilliams has scored twice so far this time around. One of them finishing off a sublime, flowing move away at Bradford. It was possibly one of the best team goals I’ve seen the Cobblers score in years.

Part of the reason for Shaun McWilliams’ more attack minded play is probably the addition of my next pick, Ben Fox.

One of Jon Brady’s first summer signings, the tenacious midfielder has helped to provide a solid base at the heart of the Cobblers midfield.

Fox is a real box to box type player who’s both strong in the tackle and good at getting himself out of tight situations.

His only goal so far in a Cobblers shirt came in the away victory at Swindon Town, guiding in Mitch Pinnock’s free kick with a lovely flick of a header.

The big problem for the Cobblers last season was the lack of depth in the squad, particularly in midfield. Thankfully, that was corrected in the summer with the additions of Fox and Marc Leonard.

The Brighton loanee is one of the most technically gifted players I’ve ever witnessed wear the claret and white of Northampton Town.

Sitting at the base of the midfield trio, Leonard is always looking to pick the ball up off the defensive line and launch an attack.

The fact that Cobblers fans are so worried about him being recalled by Brighton in January is a major reason for selecting him in this team of the year, despite him not starting that many games in the last month.

If we can keep hold of the Scottish under 21 international in the transfer window, that will be as good as bringing in a new player.

The tops scorer in the EFL, Sam Hoskins is the first name on not just Jon Brady’s team sheet but this team of the year.

Sam is a player who has divided opinion during his time at Sixfields with some fans expecting a higher goal return from the versatile attacker. In my opinion, the problem with Hoskins has always been that he’s a team player. He admits that he would rather play anywhere than not be on the team sheet at all.

He’s another who has really benefited from Jon Brady’s tenure as manager. Since Brady took charge on a full time basis, Hoskins has made the left hand side of the attack his own.

I simply couldn’t leave him out.

This is probably my most controversial pick. Josh Eppiah hasn’t had the best of times this season. He was pretty much injured when he re-signed on loan in the summer and only just started making cameo appearances off the bench in December.

I’m sure many will argue that Louis Appéré should be in ahead of him, but the truth is that Eppiah gets bums off seats whenever he gets the ball. He’s the sort of player that fans love to see and if he gets fully fit, the second half of this season will be brilliant.

I can’t pick a player based on his potential though, so he’s in the team for one particular game – the 4-2 win over Leyton Orient at Brisbane Road in April. A quickfire double at the end of the first half put the Cobblers 4-1 up at half time and ensured a third win in a row was secure.

The Postman, as he’s been lovingly coined, has been a superb player for the Cobblers. His left foot is on a par with that of a certain Martin Smith and is one of the most dangerous players Northampton have possessed in recent years.

With 22 goal contributions last season (9 goals, 13 assists) and 9 so far this term, Pinnock is part of a really potent attack that is envied across the league.

For a player who consistently cuts inside onto his stronger, left foot, you’d think other teams would know how to defend against him. But that’s what makes him so good. It would be great to see him in a Cobblers side plying their trade in League One next season.

So that’s my Cobblers team of 2022. Do you agree or disagree with my choices, let me know in the comments.