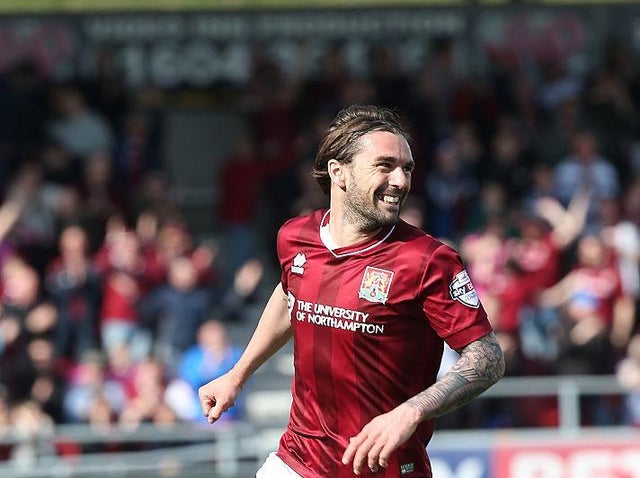 19 March 2016: Ricky Holmes picks the ball up on the right hand side of the area. A few seconds pass as Cobblers fans hold their collective breaths. He cuts inside and powers a left footed shot in off the Stevenage post to send us absolutely barmy. The league was on the way to being slotted in the bag. Promotion was a near certainty.

3 November 2020: Ricky Holmes picks the ball up on the right hand side of the area. He cuts onto his left foot and curls the ball into the area. Fraser Horsfall, only 19 years old when Holmes had produced that moment at Stevenage in 2016, heads narrowly over in a run of the mill Tuesday night league game against MK.

The two moments couldn’t be further apart in terms of the impact they had on Northampton Town in terms of stature but, four years apart, they almost meant just as much as one another.

Holmes is back in a claret shirt, as last week’s podcast celebrated in fine detail, and for that split second of breath holding you could just about take yourself back to 2016 and picture it all happening again.

Of course there’s different things at play now. For a start, we’re not chasing a promotion but instead battling to keep our heads above water in the very division that Holmes helped us to leap into.

A different kind of mentality is needed to analyse his second coming. Better opposition, a near two year lay off through injury, lockdown, no fans and a different manager. But as soon as Holmes sent that ball in for Horsfall on Tuesday night there was a sense that the old magic was still very much alive and well in those golden boots of his.

His leadership and experience will also be a crucial new piece in Keith’s fabled puzzle. Already on Tuesday night we saw him pointing and coercing teammates, conducting play in a way we just don’t get from the likes of Sam Hoskins, Rocky Balboa, Ryan Watson or Christopher Missiou. All have their parts to play but none come close to the organisation and leadership brought in by Holmes. And if he and Nicky Adams can reignite anything like the fire they spoke of in their summer podcasts with us when reminiscing about 2016 then everyone is in for a heck of a ride.

All in all, there’s two ways people are looking at this. Mostly we’re in agreement that it’s something to boost us on and off the pitch but there’s a few notes of caution out there that he’s not the same player as 2016. But listening to Holmes talk, seeing him back in claret and knowing what he’s capable of, surely the only thing left to do is enjoy each and every moment he’s on the pitch in a Cobblers shirt.

Welcome back, Ricky! Now where did I put those flip flops?

PrevPreviousThe Preview Show: Will Oxford City be the next Chippenham or Stourbridge?
NextCobblers Murdered in OxfordNext