Charles previews the Cobblers' next League Two game against Barrow. 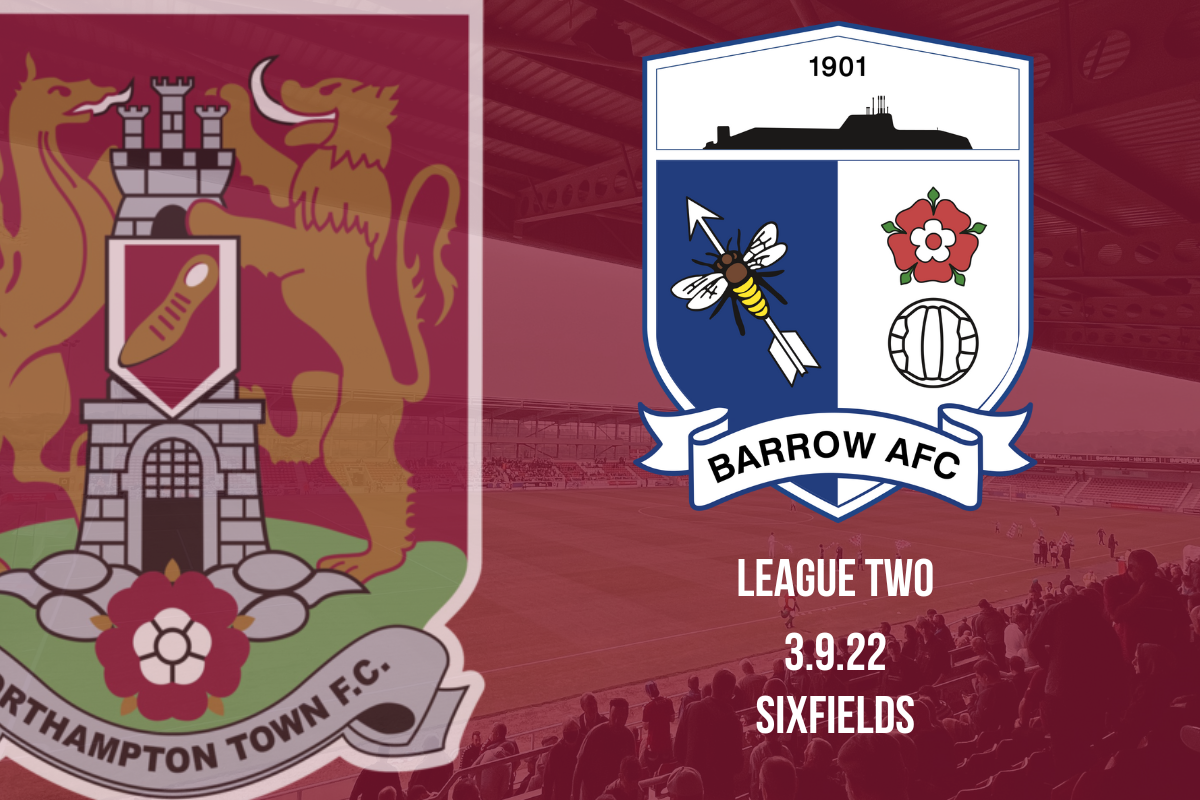 Let’s just pretend Tuesday night didn’t happen and get back to the important stuff, shall we? Good.

Barrow are the visitors to Sixfields for our next League Two match and Jon Brady will be hoping his side can get back to winning ways. The last time we met the Bluebirds, the 3-1 win paled into insignificance as Barrow’s fans laughed us back onto the train having missed out on automatic promotion in the cruelest of ways.

So, for the fans at least, Saturday is a chance to get our house in order and make the trip back up the West Coast Mainline an unhappy one for those in blue.

Barrow have defied the odds and the lower league experts so far, winning 5 of their 6 games in the league and sitting in 2nd place in the League Two table.

Pete Wild, nabbed from a successful stint as Halifax boss, has overseen a dramatic overhaul of the squad with 11 players shown the exit door and 13 new players coming in. Amongst those leaving were much fancied Offrande Zanzala and former Cobblers loanee, Ollie Banks.

Still, rather than looking over their shoulder at the National League, Barrow have surprised us all and find themselves daydreaming of promotion to League One. A couple of ding dongs over Stockport and Bradford were followed up by a fantastic 4-3 win at Blackpool in the League Cup. A 1-0 defeat away at Sutton is their only blot on an otherwise spotless record and confidence is no doubt high in the Barrow camp.

The Cobblers were thrashed 6-0 away at Ipswich, while Barrow took a bonus point off Fleetwood as they won 4-3 on penalties after an initial 1-1 draw in the EFL Trophy at Highbury Stadium.

Ben Whitfield has started the season well. The left winger has notched up 5 assists so far and is Barrow’s stand out player, despite only playing a full 90 minutes once, so far.

Signing from Stockport County on a free transfer this summer, Whitfield has become the focal point of the Bluebirds’ attacking threat. If the Cobblers are to get back to winning ways, nullifying Whitfield should be their main, defensive focus.

The Cobblers will no doubt recall their main men to the team for this one. As pointed out to me on Twitter, only 1 of the back 5 who started at Ipswich is likely to feature on Saturday, that being Harvey Lintott who will need to up his game. With Josh Eppiah undergoing a mini pre-season to get him fit, it will be down to Sam Hoskins once more to find the back of the net.

Barrow are likely to be at full strength on Saturday. As heard on The Preview Show this week, Pete Wild’s team operate a high intensity press at the top of the pitch, using all 6 of their attackers to full effect throughout the game. Expect danger man, Ben Whitfield to be alongside former Cobbler, Billy Waters and top scorer, Josh Gordon to start. With Richie Bennett, Josh Kay and ex-Cobblers youth academy graduate, David Moyo coming off the bench to keep the intensity going.

Sam Foley is also likely to start in the centre of midfield for the Bluebirds.

Chris Pollard is the man in the middle on Saturday afternoon. Pollard has been an EFL match official since the 2019/20 season. He was last at Sixfields for the Pizza Cup game against Brighton U23’s in November 2021. So far this season, Pollard has been in charge of 6 games across League One, League Two, The EFL Cup and EFL Trophy. He’s handed out 15 yellow cards and no reds to date. I probably wouldn’t expect there to be any penalties awarded either. The man from Suffolk has awarded just 6 in his last 31 games. Conor Farrell and Oliver Bickle are running the lines and the fourth official is Carl Brook.

Coming off the back of two poor results, the Cobblers need to get back to winning ways if they’re to regain the positivity of the first few weeks of the season. Barrow are in great form and their high, pressing style does worry me. But we’re at home and I’m choosing to be positive so I’m going for a 2-1 win for Jon Brady’s boys.