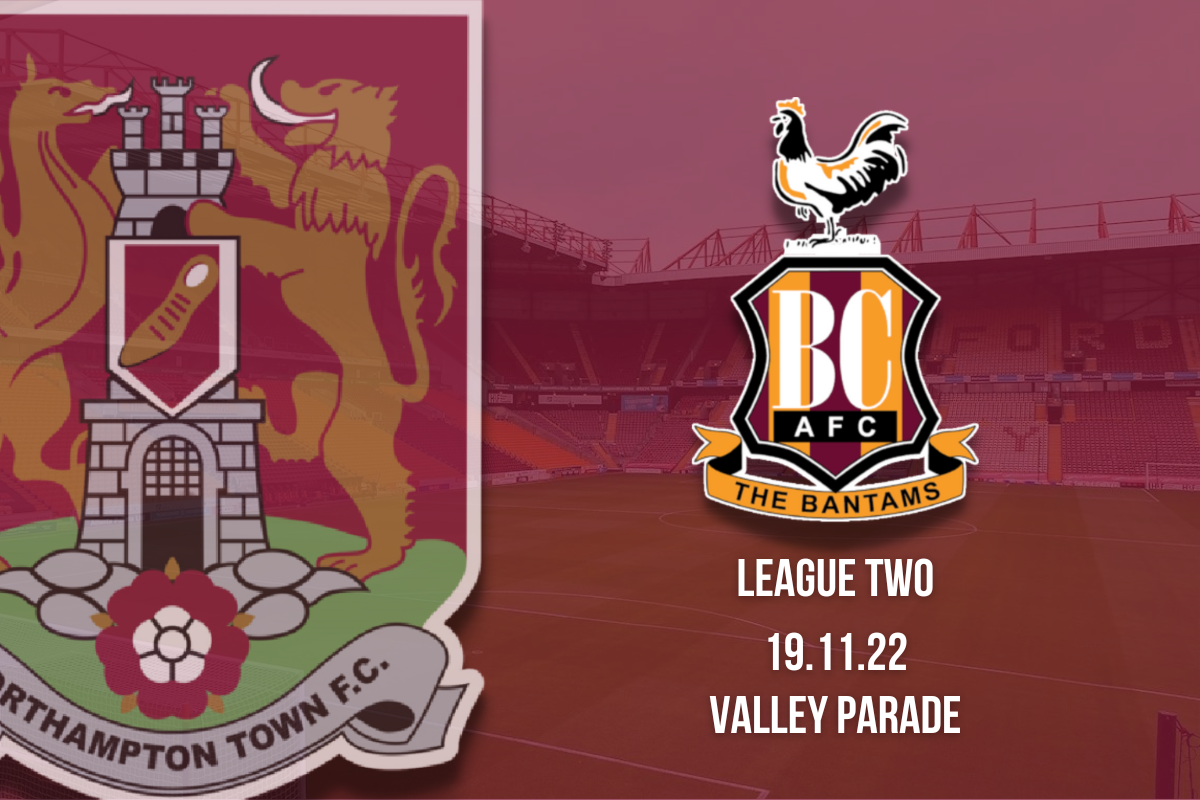 As the world’s media turns their attention to events in Qatar, League Two rolls on and the Cobblers are involved in the biggest game in the division this weekend. With a much needed two week break coming after this thanks to our FA Cup exit, Jon Brady will be determined to end the first part of the season on a high.

But trips to Bradford are never easy to manoeuvre and this particular outing provides us with, on paper at least, one of the most difficult games of the whole campaign. The Bantams will welcome a crowd of over 18,000 as they look to earn the three points that would take them above the Cobblers going into the cup break. A big afternoon in prospect, then, as we prepare for another away day battle.

Bradford are the definition of a sleeping giant in League Two. Crowds that are comfortably double that of their nearest rivals for most games and a club that could, and should, be playing at a higher level.

After Derek Adams tried to wake them and failed last season, Mark Hughes took over to the shock of the rest of the clubs in the league, steering them back towards something that looked like success. This season, his first full season in charge, is key for the former Manchester United and Wales legend, though, with his Bantams among the front runners in the betting from the off.

Hughes has continued his good work so far this season and, with Andy Cook scoring twelve league goals already, he has a platform to challenge for that elusive promotion. The size of the club inevitably comes with pressure for such a high profile manager but the sense is that he’s in it for the long haul.

Away form recently has been better than outings at Valley Parade with City without a win in their last four at home. but having pushed their way back into contention with victories at Mansfield and Sutton, the natives will be willing their side to take that next step into the top three at the Cobblers’ expense.

Bradford came away from Sutton with a 2-0 win last weekend while the Cobblers won 2-0 at Gillingham thanks to goals from Sam Hoskins and Keiron Bowie.

Andy Cook will be looking to take advantage of Sam Hoskins’ absence this weekend in the race for the League Two Golden Boot. Cook is one goal behind Hoskins in the running at the moment after a blistering start to the season for the experienced striker.

Bradford could bring Jamie Walker back into the squad after he returned to action in a behind closed doors game this week. Tyreik Wright was also back in training this week after a muscle spasm kept him out of the Sutton game.

The Cobblers are without the suspended Sam Hoskins after the League Two top scorer picked up his fifth booking of the season last weekend. Louis Appéré is touch and go again while Tyler Magloire, Ali Koiki and Josh Eppiah will all be out for a little bit longer.

Anthony Backhouse is in charge of this one on Saturday. Backhouse was the referee for last season’s league and playoff games at Mansfield Town, not endearing himself to Cobblers fans on either occasion. Darren Williams and Graeme Fyvie are running the lines and Darren Handley is fourth official.

This is undoubtedly a tough task for the Cobblers and we’ll be looking to silence a vociferous home crowd early on. I went for a win on the Preview Show this week, though, so am sticking with that! 1-0 Cobblers