Danny looks ahead to the Cobblers' Tuesday night trip to Crawley. 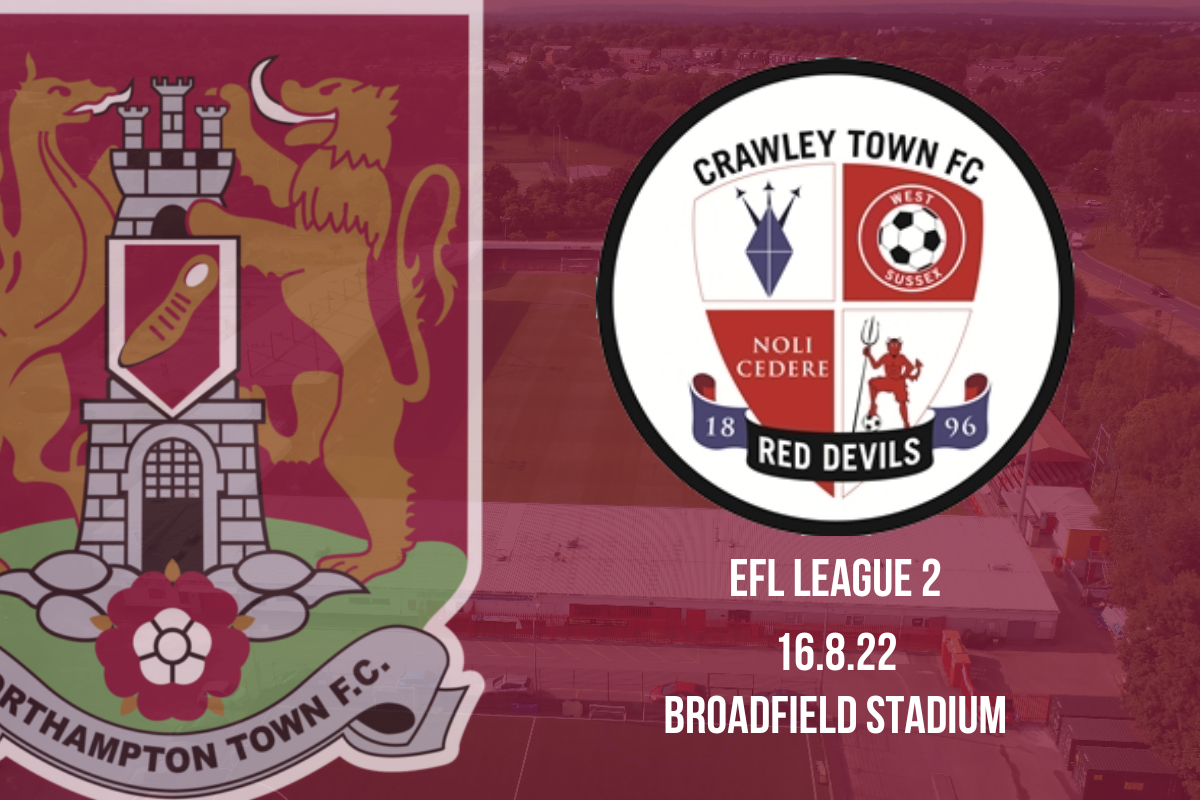 Seven points from a possible nine is an excellent return for the Cobblers by anyone’s money and Jon Brady’s task now is to come through another busy week of two awkward away trips with an unbeaten record still in tact. First up is Crawley on Tuesday night and with the hosts transitioning into a new era it’s hard to tell what we can expect down at the Broadfield Stadium.

Ultimately, though, we need to concentrate on our own game and hope that the momentum gained from the first couple of weeks of the season propels us to more vital points in the early days of the season.

A new era has came over the West Sussex club over the last few months with the takeover by WAGMI United LLC, a group of US cryptocurrency investors, putting them back in the public eye. A first glance at the Wagmi (“We’re All Gonna Make It”) website tells you everything you need to know about their ambitions with a bold statement front and centre that “Together, we’re going to take Crawley Town to the Premier League.”

Made up of influencers, investors, business leaders, designers and lawyers, the group plan to democratise the club, meaning that fans would have a say in every aspect of its running.

Taking charge on the pitch is Kevin Betsy, a man who has been involved in England’s youth setup at Under 16, 17 and 18 levels as well as holding a post at Arsenal Under 23s. This is his first full time managerial post and the summer saw him bring in last season’s League Two top scorer Dom Telford on a free transfer.

But the season hasn’t started particularly well for the Red Devils with just one point and no goals in the league so far. An opening day defeat to Carlisle was followed by a home loss to Leyton Orient. A goalless draw at Harrogate at the weekend won’t have done a lot for confidence and time will tell as to how long it takes for the new era to properly start seeing results.

Crawley were frustrated in a 0-0 draw at Harrogate at the weekend while the Cobblers were edging out Hartlepool United 2-1 at Sixfields.

There was a bit of a shock around League Two this summer when Dom Telford made the move to Crawley on a free transfer. The striker hit 25 goals for Newport County last season and there was a clamour for his signature around Leagues One and Two. So for Crawley to get his signature was a real coup and, if fit, he’ll be heavily depended on to break their duck for the season.

Joel Lynch, Dion Conroy, George Francomb, Tobi Omole and Dom Telford all missed out through injury on Saturday and Kevin Betsy will make late checks to see if he can bring any of those back into the squad for Tuesday night.

The Cobblers may rotate their squad slightly again with a bust early schedule. Aaron McGowan is still missing but is on the way to a return in the next few weeks but Marc Leonard, Ben Fox and Harvey Lintott made strong claims to come into the side after good showings during the win over Hartlepool. Jon Brady will check on the fitness of Sam Sherring, who missed the weekend with a small knock.

Taking charge of this one is Stephen Martin who has overseen two Championship games so far this season. Martin was last in the middle for a Cobblers game in the 3-2 win over Tranmere back in March. Nigel Lugg and Lee Venamore are running the lines and Alan Dale is fourth official.

Despite not finding the net so far this season, all three of Crawley’s games have been tight affairs and this one should be no different. After Hartlepool found their first goal of the campaign against us on Saturday, that fate is likely to repeat itself again but I still think we can win this. 2-1 Cobblers.