Danny looks ahead to the Cobblers' trip to Crewe Alexandra. 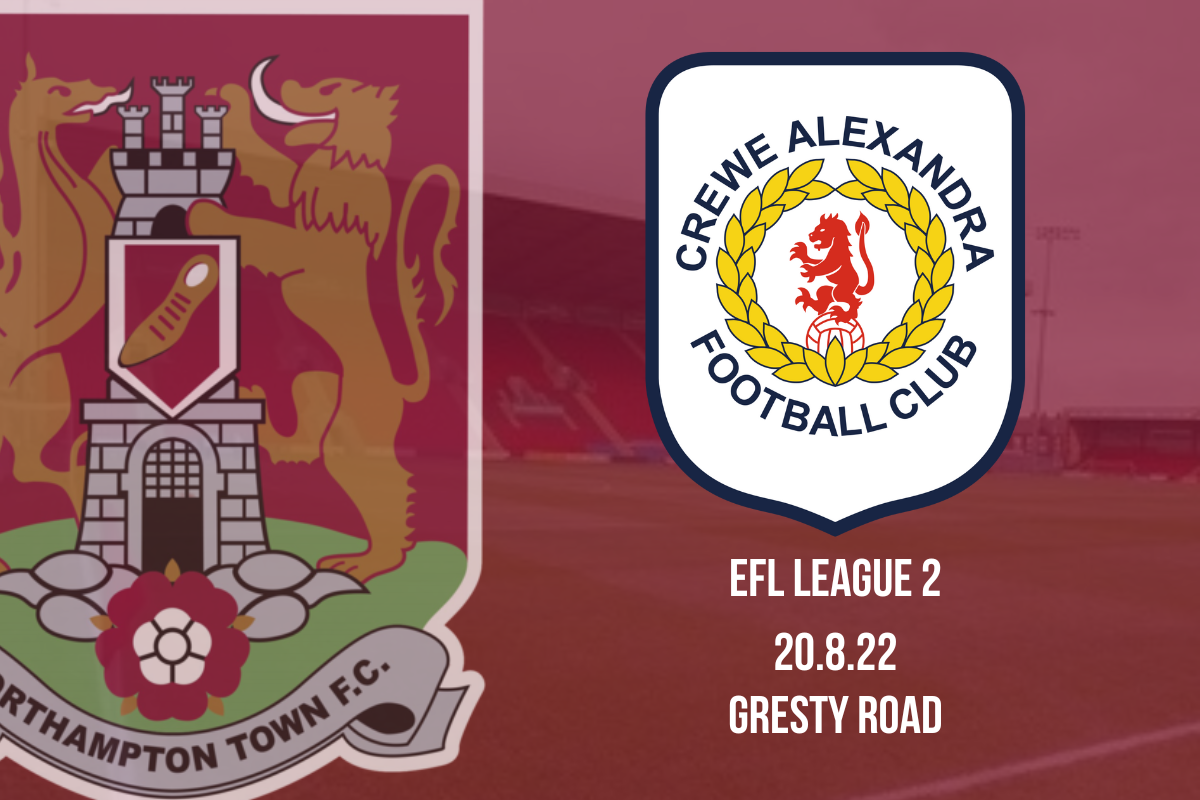 Another away test up next for the Cobblers are we look to keep our unbeaten run at the start of the season going at Gresty Road. The Cobblers came through an emotional Tuesday night game with three points thanks to the most dramatic of finishes that saw us climb into the top three of the early League Two standings.

This is probably the toughest game we’ve had so far this season so coming away with that undefeated run still in tact would be a real positive for Jon Brady’s men. With some old faces to potentially come up against and the possibility of some makeshift defences, this one could be another cracker!

A disaster of a campaign last season saw Crewe finish rock bottom of League One with just 29 points and 7 wins picked up all season. As soon as relegation was confirmed, our old friend Dave Artell was sacked and replaced by his assistant Alex Morris for the final few games of the season. Morris oversaw a 3-1 win over AFC Wimbledon in his first game in charge and impressed enough to earn a position as permanent manager over the summer.

As a player, Alex Morris came through the famous Crewe academy at the same time as the likes of Dean Ashton but a succession of injuries hampered his progress. He was named in the 2006 first team squad by Dario Gradi but was never able to make a first-team appearance for the club and retired early before joining the Alex coaching setup. This, then, could be a big chance for him to make his mark on a club he has such a connection with.

The summer has seen a big clear out take place as the Alex look to bounce back and start again under Morris. Some solid signings include Courtney Baker-Richardson from Newport and former Cobblers defender Rod McDonald. Nine points from the opening three games is a very good start and they’ll be just as desperate as us to keep that early momentum going.

Crewe edged out Sutton United at Gresty Road on Tuesday night with Baker-Richardson netting the only goal of the game. Meanwhile, the Cobblers scored in stoppage time to win 3-2 at Crawley.

Signing the exciting Courtney Baker-Richardson in the summer was a very good bit of business for Crewe. After scoring eight goals for Newport last season, he’s not taken long to get going this time out with a goal in the 3-0 win over Harrogate and another in the midweek victory over Sutton.

With early season injuries already hitting Crewe, they suffered another blow this week with the news that summer signing Charlie Colkett has been ruled out for at least three months with a hamstring injury. Former Cobblers striker Chris Long’s return to the side has also been delayed after he picked up food poisoning. Rod McDonald has been out with a groin problem but may be able to come back in but Bassala Sambou serves the second game of a three match suspension.

The Cobblers are likely to still be without Akin Odimayo, Sam Sherring and Aaron McGowan while Jack Sowerby missed the trip to Crawley with a knee problem. Tyler Magloire limped off on Tuesday night and will be checked on while Danny Hylton should return to the front line after starting on the bench at Crawley.

Taking charge of this one is David Webb, who has officiated two Championship games so far this season. His last Cobblers game was the 4-2 defeat to Derby County in the FA Cup Fourth Round replay back in 2020. James Wilson and Matthew Smith are running the lines and Lee Freeman is fourth official.

This is a really tough one to call. Both sides have a fair few injury issues at the moment but Crewe away is never an easy game. I’ll go for a 1-1 draw to keep the unbeaten run going a little longer!

PrevPreviousFAWNL Division One Midlands – Season Preview
NextIntroducing the Cobblers’ Her Game Too Ambassador!Next