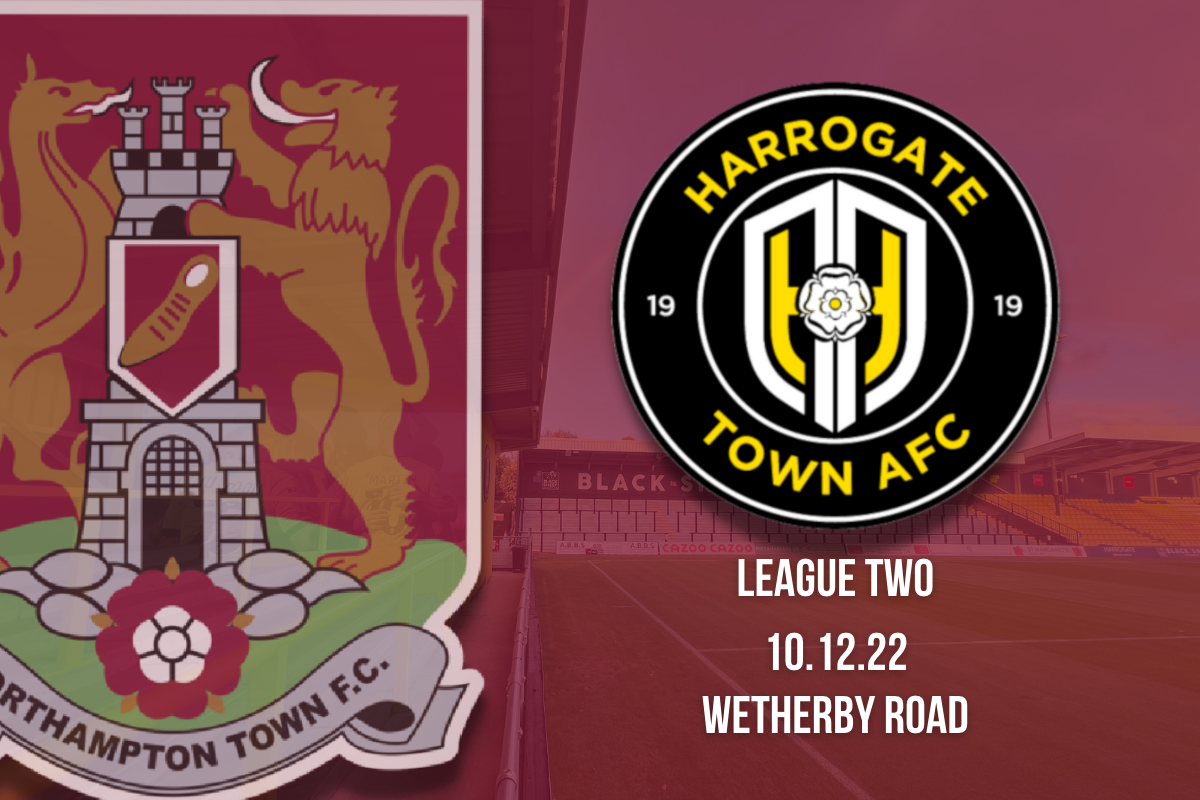 As the cold mid winter sets in and Christmas approaches, the Cobblers are moving headlong into the half way point of the season. With just three games to go until we reach that marker and with a nice buffer of five points between us and Barrow in fourth place, now is the time to start building an even stronger foundation for a promotion charge in 2023.

Jon Brady celebrated his one hundredth game in charge of the club last weekend and he’s broadly done a fantastic job in turning around the perception of the club since his arrival. Having had to build an entirely new side after relegation and missing out on promotion in such dramatic fashion, we’re pushing again and that’s not an easy task with plenty of difficult distractions off the pitch too.

This is a game where we’ll be expected to get a result but we’re coming up against a Harrogate side hunting for a third straight league win and buoyed by a couple of excellent recent performances.

Since coming into the league, Harrogate have finished 17th and 19th with 57 and 53 points respectively in those two seasons with safety the only real expectation from the majority of the fan base despite strong starts to both of those campaigns. The Sulphurites have had a slower start to this season with a winless run of eight games, including seven defeats, between mid August and mid October holding them well and truly in a scrap at the wrong end of the table.

Simon Weaver, the longest serving manager in the entire Football League with over thirteen years in the job, has been there and done it all before, though, and has come out of the latest poor run of form with two victories that showed off the potential that his side has. Beating Mansfield 3-0 is never to be sniffed at and to follow that up with a 4-1 win at fellow strugglers Rochdale was huge for their season.

With a bit of breathing space between themselves and the bottom two now, Town could well feel like the shackles can be removed even more so this could be a much more difficult game than many may expect.

The Cobblers looked a little rusty at times in our 0-0 draw at home to Tranmere Rovers last weekend while Harrogate were beating Rochdale 4-1 at Spotland.

With five goals in his last five league games, Luke Armstrong is back in form in time for the Cobblers’ trip north. After scoring twelve times last season, Armstrong is already well on the way to topping that tally this time around.

Harrogate will welcome back defender Joe Mattock from suspension for the Cobblers’ visit and there could also be returns for Jack Muldoon and Alex Pattison from injury.

The Cobblers will check on Sam Sherring, who came off the pitch with a knock on Saturday but Tyler Magloire and Ali Koiki are the only other reported absences for the trip to the EnvironVent Stadium.

Thomas Parsons is the official in charge of this one. Parsons last took charge of the Cobblers in our first away game of the season at Grimsby back in August. Hristo Karaivanov and Helen Edwards are running the lines and Kevin Mulraine is fourth official.

I can see goals in this one with Harrogate in form and the Cobblers looking to dust off the cobwebs and decent on the road. I’m going full on ding dong for this! 4-3 Cobblers.