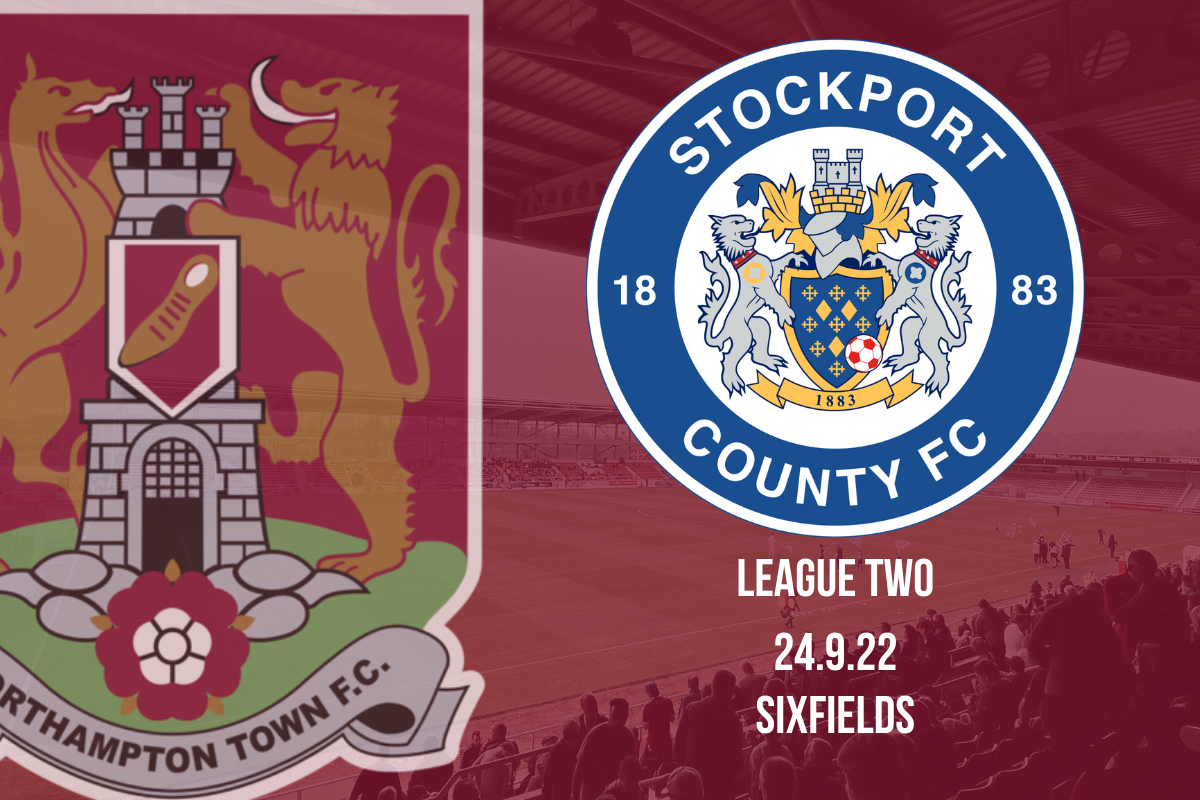 After three league wins in a row, the Cobblers welcome Stockport County to Sixfields for the first time since December 2010. A lot has changed on both sides since Kevin Thornton and Michael Jacobs handed the Cobblers a win on that day with the visitors spending the following eleven years battling it out in the National League and below.

But County have returned with riches and ambitions and arrive back at Sixfields a completely different beast to when they left. But Town will be hoping that their opponents’ relatively disappointing start to the season will roll over to this week. Extra spice will be added by the return of Fraser Horsfall and by an expected away following that should be one of the more vociferous that we’ll come up against this season.

Stockport’s demise over the last eleven years has been painful for a set of fans among the most passionate in the lower leagues. County not only dropped into the National League in 2011 but then went down again in 2013 to the National League North. After losing their full time status, the Hatters had to rebuild almost from scratch and brought Jim Gannon back for a third spell as manager. Gannon rejuvenated the club again and eventually took them back to the National League after six years.

In January 2020, Mark Stott agreed a deal to take over the club. Born and raised in the town and founder and chief executive of Cheshire-based Vita Group, Stott injected funds into the club that were almost unheard of at that level. The likes of Bolton captain Antoni Sarcevic and experienced goal getter Paddy Madden dropped down two divisions to join the revolution and County finished top of the pile last season to bring their long stay outside the Football League to an end.

Despite a summer that saw eight new arrivals, County haven’t got going yet in League Two, though, and currently sit in sixteenth with two wins and two draws from nine games so far. With murmurings about manager Dave Challinor, recruited from Hartlepool almost a year ago, starting to creep in they could really do with a win against the Cobblers to settle the nerves and to prove that they are the real deal once again.

The Cobblers were saw off bottom club Rochdale 3-0 in the league last weekend before a youthful side were beaten by Cambridge United in the Papa Johns Trophy. Stockport drew 0-0 with Harrogate in League Two on Saturday and were then edged out by Wolves Under 21s in the Trophy.

There’s only one man to focus on this week and that’s the defender who left the Cobblers for Stockport in the summer, Fraser Horsfall. The move set off some cracking banter on social media and the Hors will be well and truly in the spotlight on Saturday.

The Cobblers are waiting on scan results before knowing how serious the injuries to Shaun McWilliams and Tyler Magoire are ahead of the weekend. McWilliams came off with a groin injury at AFC Wimbledon ten days ago and Magloire pulled up with a hamstring problem during last Saturday’s win over Rochdale. Josh Eppiah and Ben Fox both got more minutes under their belts on Tuesday but it’s unknown whether Danny Hylton, Aaron McGowan or Akin Odimayo will be fit enough to return.

Stockport welcomed back Paddy Madden from suspension on Tuesday night and the striker is available again for this one. Macauley Southam-Hales could miss out again while Callum Camps is doubtful with a knee injury.

Taking charge of this one is Darren Handley who sent off Shadrach Ogie for Leyton Orient in our 4-2 win there back in April. Scott Williams and Justin Amey are running the lines and Abbas Khan is fourth official.

I’m expecting a high intensity game for this one and I’m rolling out a ding-dong prediction! I’m going for a 3-3 draw and a big afternoon’s entertainment at Sixfields.