Danny looks ahead to the Cobblers' League Cup tie with Wycombe Wanderers. 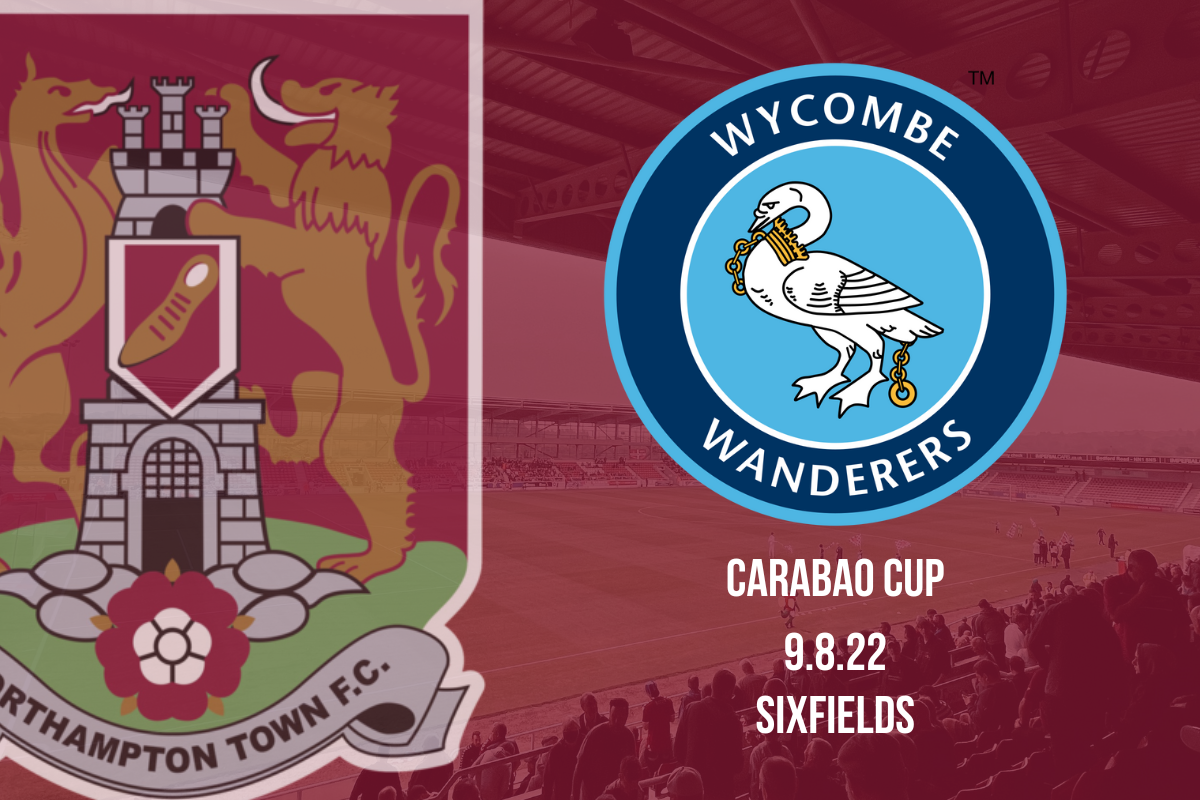 After a decent start to the league season, Tuesday night sees the Cobblers in cup action for the first time in 2022/23 as League One promotion hopefuls Wycombe Wanderers visit Sixfields for the Bayo Akinfenwa derby!

A year ago, the Cobblers upset the odds by beating Championship side Coventry City in the first round as Kion Etete marked his debut with a stunning performance to send us through. A last minute goal for AFC Wimbledon at Sixfields halted our progress, though, and if we’re to make it further this time then we’ll have to come through another difficult tie straight from the off.

Town have pedigree in this competition, though, and you wouldn’t put it past us to add another name to an ever growing list of upsets in the Carabao Cup…

Wycombe are the typical club you think of when you think what can be done with the size of club we are. The Chairboys made a stunning appearance in the Championship a couple of years ago and have been punching right at the top end of League One since. Love him or hate him, the transformation of the club under Gareth Ainsworth has been remarkable and you won’t get too many more difficult ties at this stage of the competition.

The strength of Wanderers lies in the collective and a common pulling together of every player who pulls on the blue shirt. The club are all about the sum of the parts being greater than any individual and Ainsworth doesn’t appear to be a man to go into any game with an attitude of unwillingness to give it everything. Whoever he puts out on the pitch, we know we’re in for a heck of a fight at Sixfields on Tuesday night.

The Cobblers were held to a 1-1 draw at Grimsby on Saturday while Wycombe were well beaten, 3-0 away at Bolton Wanderers in League One.

With bags of Premier League and Championship experience behind him, striker Sam Vokes is the main man up top for the Chairboys. The 32-year-old scored seventeen goals in League One last season and extended his deal just before the League One playoff final back in May.

Jon Brady has hinted at resting some of his key players for this one but Ben Fox and Kieron Bowie are likely to come into the starting lineup for the first time this season. Fox is still to get any game time after a pre-season injury but Bowie came off the bench and impressed on Saturday. Akin Odimayo is still not fit enough to play due to a hamstring injury but should be back within the next couple of weeks.

Wycombe could hand young goalkeeper Joshua Blunkell his debut after he started the last two games on the bench. The stopper, signed from AFC Sudbury in the summer after a successful trial, tasted cup stardom last season, featuring against Colchester United for Sudbury in a televised FA Cup match. Daryl Horgan is another pushing for a start as Ainsworth looks to rotate his squad. Curtis Thompson remains the only long term absentee.

Tom Nield is taking charge of this one, having last officiated a Cobblers game in our 1-0 home win over Salford back in January. Stephen Finch and Hristo Karaivanov are assistant referees and Abigail Byrne is fourth official.

The Cobblers have a good record in this competition but Wycombe are a side smarting from that weekend defeat to Bolton and I don’t expect Gareth Ainsworth to let them get away with two poor performances in a row. 1-2