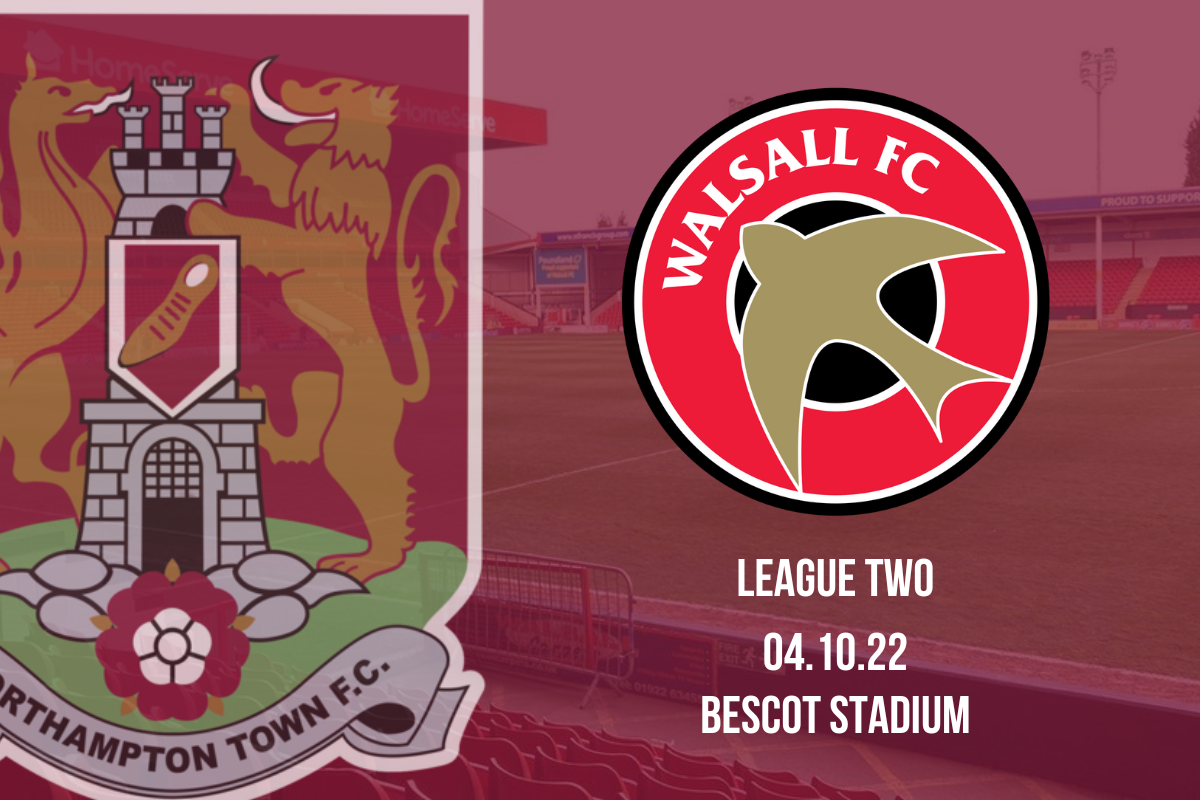 The Cobblers’ victory at Swindon Town on Saturday means that we’re now in a position where we will climb to the top of the table should we come away from Walsall with three points.

With injuries ravaging Jon Brady’s squad, it’s been a remarkable achievement to record five wins in a row for Town and a rearranged trip to the Poundland Bescot Stadium now gives us a chance to leapfrog Leyton Orient into top spot. That should be all the motivation we need and if we can make it six wins in a row we really would start to believe.

Walsall have been making some big changes since we last met in a quick fire double header in February and March. Replacing Matty Taylor with Mike Flynn in between those games seemed to make a big impact and the fact that they got ahead of the likes of Bradford, another who may well have been in for Flynn, was a real coup. With a first full summer behind him, Flynn is ready to properly kick start his Walsall era and you can guarantee a tough game against any of his teams.

Off the pitch, US investors Trivela Group purchased 51 per cent of clubs shares owned by incumbent chairman Leigh Pomlett over the summer and promised of an immediate investment of capital. In phase two of the deal, expected to take place within two years, they hope to acquire Pomlett’s remaining 25 per cent shareholding and provide additional funding to enable the club to purchase its Poundland Bescot Stadium and surrounding property.

While the takeover isn’t of the level boasted by the likes of Crawley, Salford or Stockport at this level, it’s still a deal that will give Saddlers fans hope of ending a malaise over the last few seasons and have a go at the top half of League Two at the very least. It’s not been plain sailing so far, though, with the Saddlers without a win since the second weekend of the season, losing five and drawing three since.

The Cobblers came from behind for the second weekend in a row to win 2-1 at Swindon on Saturday while Walsall scored late in the day through former Cobbler Andy Williams to earn a point at Stockport County.

Battling Sam Hoskins in the early running for League Two leading scorer is summer signing Danny Johnson who has hit the ground running since arriving from Mansfield Town on loan.

The former Orient man has scored six times in the league already for the Saddlers and will need to be watched keenly by the Cobblers rearguard.

Walsall’s Jack Earing and Oisin McEntee remain out for this one but there is a chance that Joe Riley could return after he missed out altogether in their 1-1 draw a Stockport County last time out.

The Cobblers welcomed Akin Odimayo back to the sqaud for the game against his former club, Swindon, at the weekend and he should be back on the bench again here. Sam Hoskins, Josh Eppiah and Max Dyche all missed the game through illness, though, and will be checked on before a decision is made on their involvement. Shaun McWilliams, Tyler Magloire and Aaron McGowan are still missing.

Samuel Barrott is the referee for this one. Barrott has mainly seen action in League One so far this season, showing 29 yellow cards but no reds so far. His last Cobblers game was our 3-0 win over Stevenage last October. Joe Simpson and Alex Gray are running the lines on Tuesday night with Ed Duckworth the fourth official.

Walsall are struggling at the moment but you can always expect a tough game against a Michael Flynn side. There should be a good following of Cobblers fans on Tuesday night and I think we can get that win we need to go top of the table. 2-1 Cobblers