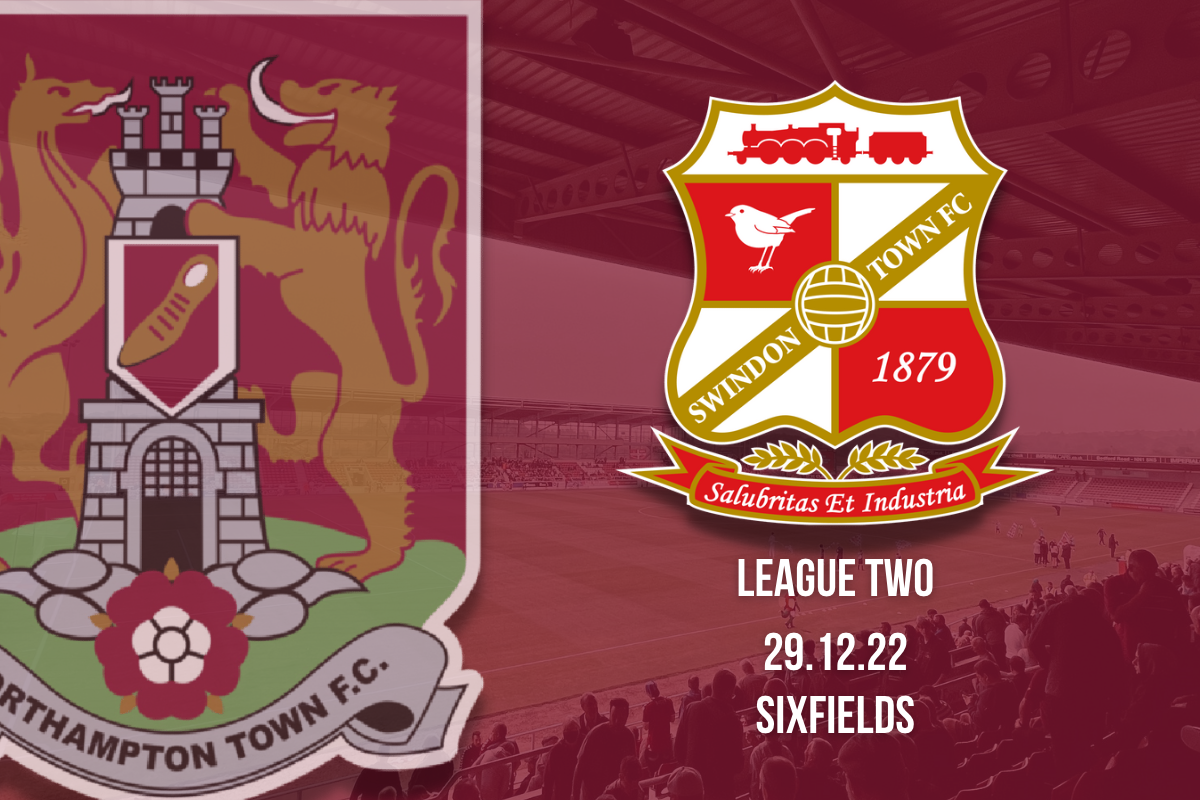 It’s ironic that after Sam Hoskins’ Paulo Di Canio esque goal on Boxing Day, our next opponents are the team he used to manage, Swindon Town.

Thursday night’s encounter is the first of two big games at Sixfields over the New Year period. And with a near sell-out crowd expected – Swindon have sold out their allocation – it’s sure to be a cracker.

In another twist of irony, 2022 started with a game against Swindon at the County Ground. Hopefully, we’ll witness a better result at Sixfields to end the year.

While he won’t be available for the game, Swindon will be buoyed by new signing Charlie Austin. The striker, who left them in 2011 and went on to play for Burnley, QPR, Southampton and West Brom has reportedly signed a deal to return to the County Ground from January 1st.

Swindon are 5th in League Two coming into tonight’s game having lost at home to Walsall on Boxing Day and only 1 win in their last 5.

That doesn’t mean Swindon will be easy pickings though. While I wouldn’t call them a bogey team, they have won at Sixfields on numerous occasions, the last being a 1-0 win in February 2020.

The Cobblers drew 1-1 at Mansfield while Swindon lost 2-1 at home to Walsall on Boxing Day.

21 year old Jacob Wakeling has been involved in 10 of Swindon’s 26 goals this season. With 5 goals and the same amount of assists, Wakeling can play as a striker or right winger. He signed for Swindon in the summer from Leicester City’s academy after enjoying a loan spell at Barrow for the 2nd half of last season.

Ali Koiki may return to training this week but Thursday’s game will come too soon for the attacking left back. Otherwise, Jon Brady has a fully fit squad to pick from and Mitch Pinnock may now be full

Just like the Cobblers, Swindon have had an illness going through their squad in recent weeks and so will be without defender Ciaran Brennan but manager Scott Lindsay does have Luke Jephcott back from a lengthy spell on the sidelines.

Lewis Smith is the referee on Thursday night. Lewis has taken charge of just 3 games in the EFL this season. This will be his third League Two match of 22/23 having also presided over the League One game between MK Dons and Forest Green on Boxing Day.

Is those 4 games, Lewis has shown 14 yellow cards and no reds. Michael Webb and Hristo Karaivanov are running the lines while RAlan Young is fourth official.

Games against Swindon are usually tight affairs. Yes, I’m ignoring last season’s hammering at the County Ground on New Year’s Day. Apart from that game, our first game back after an enforced Covid break, games between the two sides are usually settled by just 1 goal. So with that in mind, I’m going for a 2-1 Cobblers win.

PrevPreviousAre the Cobblers the best team in the League?
NextCobblers Team of 2022Next