The Cobblers are in a fine run of grabbing goals at the death...let's take a look at some more last gasp Town goals! 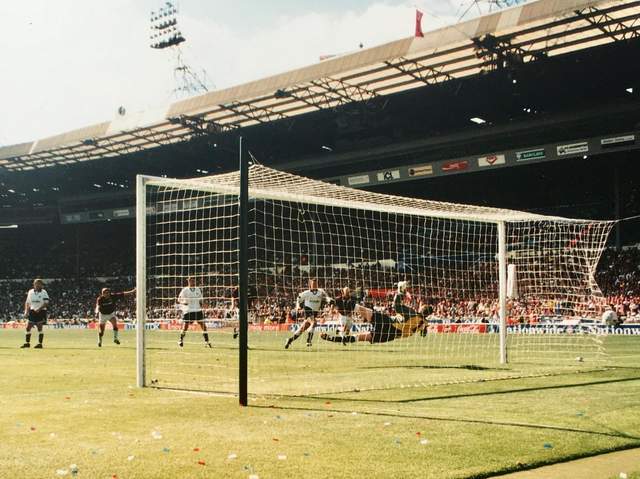 The Cobblers are absolutely flying at the moment in terms of finding ways to scramble a goal from the depths of despair and grabbing points out of absolutely nowhere. Already this season, we’ve seen Ryan Haynes, Keiron Bowie and Sam Hoskins net injury time goals that have earned the Cobblers five more points than they would have had otherwise.

That kind of thing isn’t normal for Town, as you well know, but it’s triggered the latest in our “Ten of the Best” series…I’ve more than likely forgotten some so please do get in touch with your favourites from Cobblers past.

Here’s some of my favourites though…Ten of the Best: Last gasp Cobblers goals:

There’s only one place we can start. The absolute pinnacle of last gasp goals. Not only the last kick of the game but the last kick of a season and a free kick that is arguably the Cobblers’ most memorable goal of all time. John Frain in the 93rd against Swansea in the Playoff Final below the Twin Towers of Wembley…perfection.

We don’t need to explain it again but we will because of how special it was. Christian Lee is fouled on the edge of the area, Frain hits the free kick into the wall and it looks as though we’re heading for extra time. But referee Terry Heilbron orders a retake, Ian Atkins grabs a pocket cross, 32,000 claret-clad Cobblers fans hold their breaths…and then this…

To get to those playoffs, the Cobblers had to battle against the odds in a Division Three season that saw us celebrate 100 years of the club we love. This squad were unexpectedly in the upper reaches of the table come the final third of the campaign and faced a Lincoln side that were as physical as it gets.

Steven Holmes gave the Imps a lead mid-way through the second half as they looked to keep alive their own promotion hopes. But, in a dramatic finale, the Cobblers won a penalty in front of the North Stand. Up stepped Roy Hunter, reliable as ever, to score from the spot and earn us a huge point.

Lincoln went on to miss out on the top seven by three points and the Cobblers finished four points clear of eighth place. What might have been had Hunter missed that kick?!

Grimsby came into this one knowing that a win would guarantee them a place in League One the following season. The Cobblers had already earned that same reward by beating Chester at Sixfields seven days earlier and had arrived at Blundell Park for a party like no other.

It didn’t even matter when the home side took the lead and looked set to join us in the parade but, in one of the most dramatic ends to a league season possible, everything fell apart for them in stoppage time. As home fans gathered for a pitch invasion and fireworks and confetti were prepared, Ryan Gilligan pounced to scramble in an equaliser and silence the party like your parents coming home and switching off the music.

Scunthorpe had come to Sixfields for a party. A win here would have sealed their rise into the Championship and their fans sold out the away end in anticipation. What they didn’t realise was that they were walking into a cauldron of noise thanks to an emotionally charged build up to the game from our side of things.

Before the game, Cobblers fans had marched in their hundreds in protest to the latest council delays to the Sixfields redevelopment. After the march, the Cobblers’ fans still had a lot of pent up energy and created a memorable atmosphere, helped by the noise from the away end and took the lead through Alex Pearce. Billy Sharp equalised to give the Iron hope of promotion but Bradley Johnson swooped in stoppage time to win it and to royally “piss on their party.”

Johnson was sent off for over celebrating but it really didn’t matter. One of the greatest noises for a goal that didn’t have a massive impact on our own league status that Sixfields has ever heard.

When Rotherham United came to visit on Good Friday 2011, Town were in desperation land. Sammo had been replaced by Gary Johnson in the top job and the former Bristol City man had failed to turn the fortunes around enough to avoid a battle against the drop.

2-0 down at half-time and there seemed no way back in this clash with a Millers side chasing the playoffs but Leon McKenzie made it 2-1 to set up a finish that will always be remembered for the celebration of one man.

Liam Davis got the equaliser in stoppage time, sending Sixfields delirious and for supporter Derry Felton it was too much. He proceeded to invade the pitch alone in his wheelchair and went from the half way line all the way to the North Stand to celebrate. It was one of those moments where you just can’t help but smile and know that this could only happen in the lower reaches of English football!

The rocky road to the 2013 League Two playoffs was looking like taking another bumpy path as the Cobblers, under Aidy Boothroyd, fell behind to a Jack Redshaw goal mid-way through the second half.

But step forward one of the saviours of the season – Kelvin Langmead- to stoop late on and secure a much needed point for Boothroyd’s men, latching on to a rebound from Ishmel Demontagnac’s free kick that had hit the post. The Cobblers had already hit the woodwork four times during the game so this was a deserved point to help us on the way to the top seven.

Best not mention those playoffs, though…

Cobblers fans are a cautious bunch when predicting promotions but this game made even the most pessimistic members of the Shoe Army stand up and recognise that, not only was promotion meant to be, but the League Two title had our name well and truly carved on it long before the end of an incredible season.

Stevenage had looked like creating a road bump in our way as they took a surprise 2-0 lead in the first half. But James Collins pulled one back before the break and the comeback was on! John-Joe O’Toole stabbed in an equaliser and Fraser Franks was sent off for the home team as we lay siege to the home goal.

It looked like being a frustrating draw until Sir Ricky of Holmes got the ball and decided he wanted three points and not one. What followed was one of the most memorable goals in the Cobblers’ history…

In October of 2018, the Cobblers still hadn’t won a home game all season and came up against a Forest Green side that hadn’t lost a game anywhere all season. The script was written as the visitors took the lead just before half-time and that familiar sinking feeling took hold in the home stands.

But Aaron Pierre smashed us back in the game and suddenly belief grew around Sixfields. A draw would have been a decent result but that wasn’t enough for Town. Kevin van Veen, in a rare moment of energy, chased a ball down and Andy Williams was waiting in the middle for a free shot on goal which he duly converted.

Absolute scenes and a pitch invasion in mid-October showed us just how desperate we were for those home points on the board.

MK sitting in second place in the League Two table before a Christmas time trip to Sixfields and the Cobblers in mid-table, an away win looked inevitable. That inevitably increased when Alex Gilbey and Chuks Aneke gave them a 2-0 lead.

With murmerings of discontent around Sixfields, we needed a lift and got it as Jack Bridge’s corner was headed in by Andy Williams to give us hope. Then came a late long ball (under Keith Curle? Surely not?!) that Junior Morias chased down and beautifully lobbed over the MK keeper, and former Cobbler, Lee Nicholls to send the place ballistic and create a moment with a plastic chair that will never be forgotten!

Runaway league leaders Forest Green came to Sixfields absolutely flying in League Two and looked odds on to saunter towards the title. The Cobblers went into the game eleven points behind them and needed a result to keep in touch with the top three.

Rovers took the lead in hugely controversial circumstances when Matt Stevens’ header clearly didn’t cross the line but was given. The anger in the home stands was palpable and it surged the Cobblers on for the remainder of the game. So when Mitch Pinnock picked the ball up just outside the area and slammed it home, the place went wild and sparked a mini pitch invasion once again!