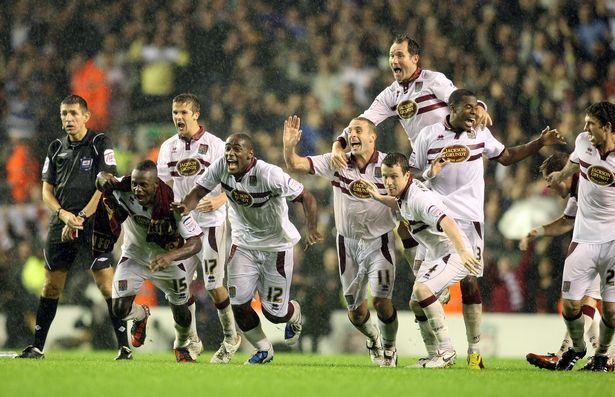 Welcome to a new feature here on It’s All Cobblers To Me. “Ten of the Best” will look back on the Cobblers’ glorious history and we start today with a timely reminder that we can produce some fine moments in the League Cup.

The Cobblers have never really bothered the League Cup’s later rounds barring a couple of Quarter Final appearances in 1965 and 1967. In fact, since those heady days of the mid-sixties, Town have only made it past the third round on one occasion. We’ll come to that later! But while we are in the competition, we do have a lovely old time. And so we come to ten of the best…Cobblers League Cup Upsets…

With Villa on the decline and struggling on and off the pitch in the Second Division, the Cobblers, by now back in the Third Division, came out on top at the County Ground thanks to goals from John Mackin, Frank Large and James Hall. This would be one of the highlights of the season for Town, who finished 17th in the league and bowed out of the cup to Millwall in the following round, 5-1 at the Den in a replay.

The Cobblers, now starting to feel at home back in Division Four, came through against Third Division Millwall over two legs in a double header that came before the league season had already begun. Town won the home leg 2-1 but then would have expected a rough ride at the Den in the second. But a 2-2 draw in Bermondsey earned us a memorable win. The Cobblers would go on to beat Oldham 3-0 in Round Two before losing out to Brighton in Round Three.

A famous night under the Sixfields lights as Chris Freestone and the Cobblers made a mockery of West Ham’s full strength eleven, taking a stunning 2-0 lead into the second leg at Upton Park. Freestone scored a scrambled effort and a beauty of a header to give us control before a backs to the walls and gutsy performance in the second leg. A young Frank Lampard pulled one back in the tie late on in the second leg but Ian Atkin’s men were not to be denied.

A claret revolution was in the air at the start of the 03/04 season with big spending Cobblers looking to make an immediate return to Division Two. A tame 1-0 home defeat by Torquay on the opening weekend in the league needed to be put right as quickly as possible and this single goal win over Division One Norwich was just the tonic. Josh Low scored the only goal of the game, Martin Wilkinson showed us his belly at full time and Norwich went on to win promotion to the Premier League with 94 points. Everyone’s a winner!

A forgotten gem, this one. Gillingham, of the Championship, were shell shocked at the Priestfield thanks to first half goals from Eric Sabin and Scott McGleish. The Cobblers, still in the now rebranded League Two, held out despite a goal from Mamady Sidibie mid-way through the second half. The Cobblers were well beaten in the following round by Premier League Southampton.

Bolton, at this point in their history, were a well established Premier League club with this being their eighth consecutive season in the top flight. But they’d not met anyone like Adebayo Akinfenwa, who stole the show at the Reebok Stadium, scoring twice in the first half. Bolton stalwart Kevin Nolan hit a late goal for the hosts but Town held out for a famous victory. We would almost repeat the trick in Round Three as we took Sunderland all the way to penalties at the Stadium of Light having been 2-0 up going into the closing stages but eventually bowed out in the shootout.

One of the most famous nights in our club’s history and probably the greatest win we’ll ever see in the competition. Heavyweights Liverpool took the lead early on through Milan Jovanovic before Billy McKay sent the thousands of Cobblers fans absolutely ballistic by equalising early in the second half. We held out and held our own through to extra time, when Michael Jacobs put us in dream land and Kevin Thonton shushed the Kop. A David N’Gog goal four minutes from the end of extra time was against the run of play but the Cobblers, heroically, came again and won the most famous shootout in our history. All together now…”HE SILENCED THE KOP, HE SILENCED THE KOOOOP…THAT ABDUL OSMAN, HE SILENCED THE KOP”

A year after killing our League Cup run in Round Four, revenge was on our minds as we headed to Championship side Ipswich Town in the First Round. Jay Emmanuel-Thomas looked to be sending the tie the same way as the previous season but the Cobblers stormed back. Ben Tozer equalised and Paul Turnbull, of all people, netted the winner.

An absolute ding-dong at Molineux as the Cobblers went toe to toe with Championship opposition once again. After a goalless first half, Lawson D’Ath and Ivan Toney put us in control before Nouha Dicko got one back for the hosts. Sam Ricketts equalised just a minute later and the game looked to be getting away from us until D’Ath produced a beauty of a winner with fifteen minutes to go.

The League One Cobblers went in front against the Premier League Baggies when Zander Diamond headed in from a Brandan Maloney cross. James Maclean levelled the scores before Gareth McAuley gave the visitors the lead. But Alex Revell’s goal took the game to extra time and Town won out on penalties. Former Cobblers loanee Said Berahino missed his spot kick and Kenji Gorre scored the winning penalty to send us through on another big night at Sixfields.